You do not need to have the issues of leaking, blocked or damaged pipes that can upset your day or week. If you have worries or you are experiencing issues that suggest there is a problem somewhere and need a plumber with top experience in pipe relining Northern Beaches wide, come take a look at Down Under Pipe Relining. We can send you a professional and experienced plumber that can handle either residential or commercial pipe relining anywhere in the Northern Beaches region and beyond.

When you need Sydney pipe relining specialists who can offer an alternative to the messy and invasive digging traditional method, we can help.

WHY DOWN UNDER PIPE RELINING?

A fast process so you can get on with your life and business.

An affordable solution to fit a range of budgets.

Save your garden and home from digging up whole pipe sections.

Our team is fully licensed and insured for pipe relining work.

We offer an extensive warranty on our workmanship and materials.

BEFORE AND AFTER PHOTOS WHICH SAY A THOUSAND WORDS

As they say a photo equals a thousand words, and our real before and after photos taken at some of our residential customers premises show the radical transformation pipe relining can have on your pipes. After a pipe has been lined your pipes will have a super strong structure and smooth flow that will last for decades.

What does the process entail?

The first step of any pipe relining job is a pipe relining technician from Down under Pipe Relining will come to your Sydney address and inspect the damage with our special remote camera which can use a snake-action to make its way to the blockage in your pipe. This camera is connected to our screen which will assist us in identifying the issue; this might include cracks or bits of material blocking/clogging the pipe system. Next we will use a high pressure water jet to spray into the pipe which will clear any loose material from the pipe to prepare it for the relined pipe. This can clear blockages caused by root incursion.

Once the pipe has been thoroughly cleaned and the site has been well prepared by our technician, we will insert a special textile liner which is coated with a durable resin. This will be done using water or pressurised air. This pressure will invert the liner and push the resin against damaged areas of the pipe and it will naturally form into a pipe shape which will push into any crevasses in damaged areas of the pipe. The final solution is a super durable and smooth protective layer across the whole length of the previously damaged pipe.

Once the new lining has fully cured, the Down Under Pipe Relining specialist will inspect the relined pipe wit the same remote snake camera system to confirm the reline has been successfully applied to all areas of the pipe and all obstructions have been fully cleared. You now have a pipe that is good as new which will last for decades and with smooth flow.

What technology is used?

Our customers deserve the best, that’s why at Down Under Pipe Relining we only use Brawoliner products. Brawoliner is a German manufacturer that is a pioneer in the pipe relining space. We firmly believe that the best solution starts with the right materials and equipment. Anything less and your relined pipe could rupture due to poor materials or workmanship. But don’t let German quality convince you that pipe relining is expensive, far from it. In fact, relined pipes are considerably cheaper than repairing or installing new pipes using the traditional method. Furthermore, all Brawoliner products have long 50 year life expectancy, which will probably live longer than your home or business structure.

What is trenchless pipe relining?

Traditionally fixing pipes consisted of digging a long trench around your underground pipe and can be a trial and error process to get right. But this method always takes a long amount of time to complete and it can cause lots of damage to your garden, landscaping, home and business. The work could interfere with the foundations of your premises and then the bill really starts adding up! Even if a rupture can be located quickly and a new pipe is a viable option to replace the pipe, the whole replacement process will expose your environment to sewage and other contaminants which is not pleasant for you, your neighbours, and don’t even think about keeping your business open. But that’s not all, once the job is all done the cleanup and landscaping or even rebuilding process is not only costly but can take days and sometimes weeks to get right.

With our trenchless pipe relining technology, repairs can be made at the precise area which minimises excavation on your property. Amazingly, during the trenchless relining process no pipes are actually removed and you won’t be exposed to sewage from the original damage in the pipe. With trenchless pipe relining you will always get a smooth finish on the inside of your pipes which will last close to a lifetime.

How long does it last?

The biggest fallacy about the pipe relining process is that it’s just a patch job. Nothing could be further from the truth. A well relined pipe, installed by a professional like the team at Down Under Pipe Relining will offer a permanent and superior pipe, even compared to your original pipe when it was first installed.

So if you are looking for “pipe relining Sydney” then there’s only one company you need to call, Down under Pipe Relining. No matter how the damage has been caused or how extensive it is, whether it’s caused by tree roots or movement in the ground or building or just general ware and tear, our pipe relining process is the obvious choice when it comes to time, quality and cost.

What types of pipe and sizes are suitable for relining?

Great question! Our pipe relining solution can work with all types of pipes including earthenware, PVC, copper, galvanised iron, HDPE, concrete, asbestos or cast iron. If you aren’t sure what material your pipes are, don’t worry our team will be able to inspect your pipes and let you know, but rest assured, pipe relining can work for your pipes!

Our pipe relining solution is compatible with any sized pipes larger than 90 millimetres in diameter.

Can you reline around bends and other junctions?

You betcha! The Down Under Pipe Relining solution can tackle any harsh bends in your pipe work with a single reline, including a 90 degree bend. We can also reline junctions without any major dramas.

How strong are relined pipes?

Our warranty says it all! But these days most new pipes are made from PVC, but when fully cured, a relined pipe is four times stronger than PVC and is often stronger than your original pipe when it was first installed.

What are the different types of pipe relining?

There are a couple of variants of pipe relining, let’s go through some of these below:

Pipe relining is performed on the whole pipe or at least a substantial part of the pipe. Any pipe distance grater then one metre can be considered pipe relining as it relines a decent portion of the existing pipe. This process is usually performed as an extra measure to prevent tree roots from intruding through other possible weak points of the pipe.

Pipe patching is performed where there is just a very small portion of the pipe that needs to be relined. This might be a section as short as 30 centimetres. We consider this to be a small pipe patch or repair and the relined work will prevent that section fo the pipe from being damaged in the future in that specific area.

Junction repair is where one pipe meets another and is usually more complicated than typical pipe relining work as it requires more initial preparation and planning. But once again, pipe relining can be a suitable solution for some junction repairs.

How is sewer relining in Sydney done?

Sewer relining in Sydney is a trenchless procedure where the underground pipes are relined using epoxy or polyester resin lining. The resin pushed into the pipe using pressurised air or water and it reaches the area where the problem lies. With no digging involved, the technicians find an access point to insert the resin. Digging and removing the sewer lines can be an expensive journey. Sewer relining in Sydney has become an alternative, new-favourite method that comes with a myriad of benefits. Give a call to our professionals if you want the underground pipes to get relined with sewer relining in Sydney.

WHAT OUR LOYAL CUSTOMERS SAY

How does pipe relining work? 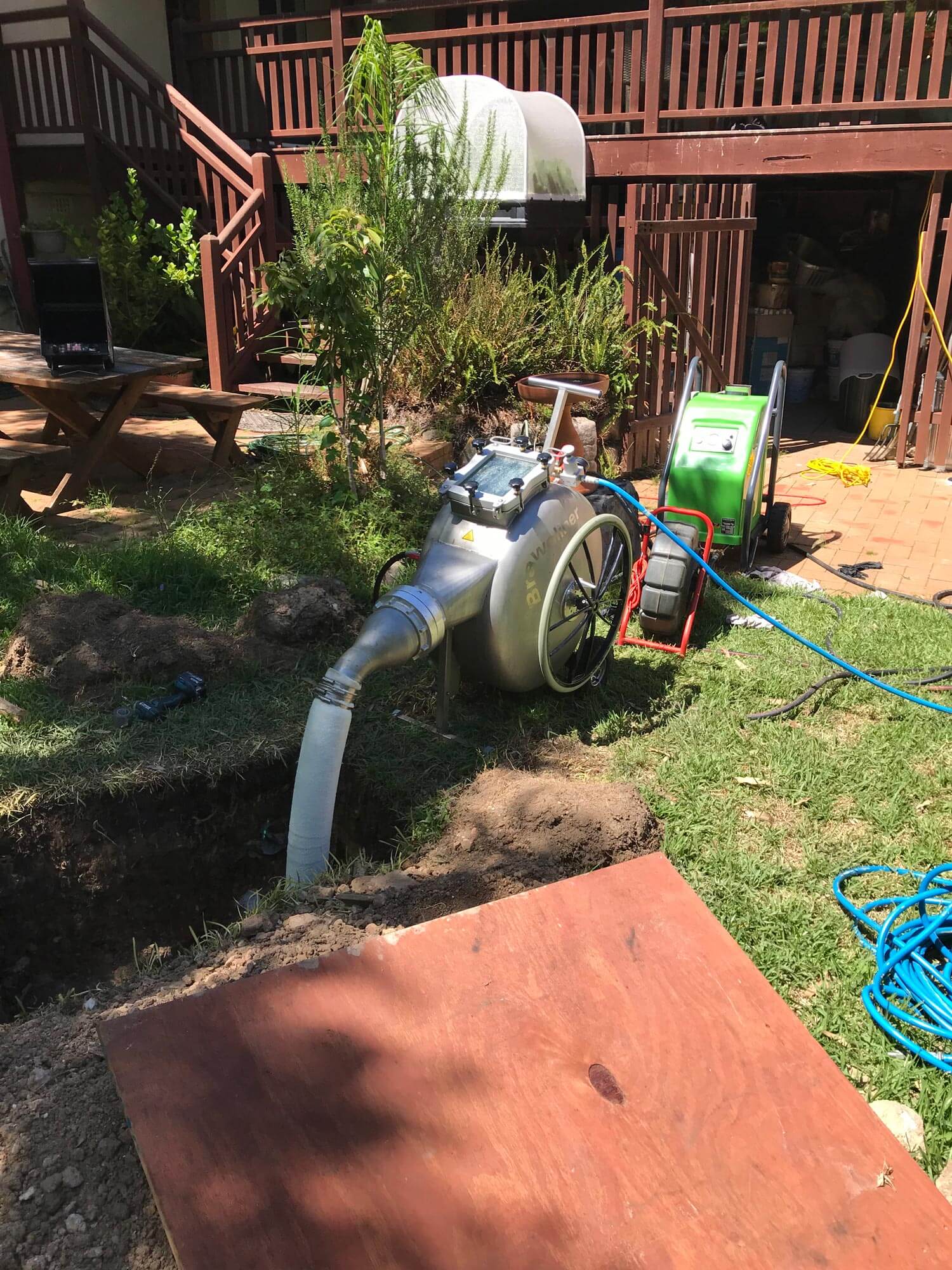 This is a much quicker option without all the mess drain and pipeline investigation used to involve. Here is an outline on how to use this latest technology in pipe repair and maintenance technique:

In less than a day, you can have the issue fixed and your plumbing pipe is working good as new!

Why choose no dig pipe relining for your Northern Beaches pipes?

Here are some facts about the process that makes it the more attractive plumbing repair option.

Looking for a professional plumber that has already proven to be reliable, professional, licensed and comes with a great reputation is hard to find. It takes time and you are not always sure you get it right until they do a job for you. At Down Under Pipe Relining, we only employ the best local pipe relining experts with outstanding performance in high-quality work, expert knowledge and customer service. You will get:

The best option for dealing with tree roots

One of the biggest problems drains and pipes face are tree roots. They cause a lot of damage and blockages. In the past, they were not always easy to find and costly to repair as well as being time-consuming and messy. With the combination of top plumbers from Down Under Pipe Relining and more advanced technology and developments, it is now possible to deal with them more cost-effectively and more quickly. Choosing Northern Beaches pipe relining services is the best option. No digging is required, just root removal with high-pressure water, and then putting in the lining that then protects it from further root invasion. The old method could see root invasion start the process over again in just a few months. Drain relining protects the pipe for 50 years.

Reach out to the Northern Beaches pipe relining experts now!

If you are interested in this innovative trenchless pipe relining Northern Beaches method and want to talk to an expert about pipe relining, give us a call today. No mess, no digging up your property, stronger pipes and a fast and effective fix is just a call or email away!